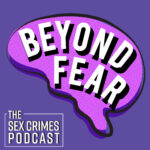 Beyond Fear: The Sex Crimes Podcast
E11: "Do Women Do Those Things?"

The image that comes to mind when we think about a person who commits a sexual offense is more often than not, male. While it is true that the vast majority of sexual harm around the world is committed by men, women can – and do – commit sex crimes. In this episode of Beyond Fear, Alissa interviews Alexa about her expertise on female sexual offending. Alexa sheds light on this important, understudied and often misunderstood issue.

The names that come to mind when we think about women who sexuall offend are those that have become household names: Mary Kay Letourneau and Debra LaFave. Both were attractive, relatively young school teachers who sexually abused younger boys. However, we cannot and should not reconcile all sexual abuse committed by women with that which was committed by these two women.

Sexual abuse by women happens for a variety of reasons. Some of these reasons are similar to those we understand about men who sexually offend and some are quite different. It is important that we recognize and understand these reasons so we can promote prevention efforts.

A few important things we do know: